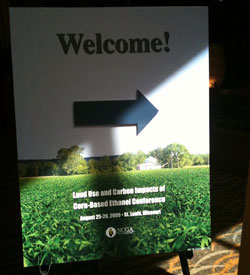 Kicking off the NCGA Land Use and Carbon Impacts of Corn-Based Ethanol Conference and welcoming participants was Conference Chairman, Jamey Cline, NCGA Director Biofuels and Business Development. I spoke with him after the opening session.

Jamey says that regulations from the California Air Resources Board (CARB) and from EPA on the Renewable Fuel Standards (RFS) have brought up a number of questions and this conference was put together to ask them and receive answers in a public forum with various stakeholders. A lot of these current or proposed regulations are based on assumptions and economic theory and so questions need to be asked to make sure the latest data is being used and reasonable predictions are made for the future. He says that these issues are extremely important to agribusiness and corn growers in particular because if the CARB regs hold up, by 2012 they will effectively shut off that market to ethanol. Additionally, one presenter said that due to the proposed climate change bill and RFS, approximately 27.1 million acres would be taken out of production across the Unites States. That would have a huge impact on our economy, especially in rural areas.

He also speaks about the various models being used or referenced on the topics like land use change and life cycle analysis.

You can listen to my interview with Jamey here: