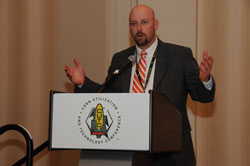 Indirect land use change and DDGs quality were two of the ethanol-related topics that were featured at the recent 2010 Corn Utilization and Technology Conference (CUTC) in Atlanta.

Geoff Cooper with the Renewable Fuels Association took part in the event and chaired one of the technical sessions. Geoff used to work for the National Corn Growers Association, so he has been involved in this conference before, and he says it has definitely changed over the years. “Five or six years ago if you had come to this conference, you would not have heard many mentions of greenhouse gases and carbon footprint and things like that, but those issues are front of mind with the industry today and those themes really permeated a lot of the sessions this year,” he said.

Cooper says there was also some discussion at the conference about an environmental group lawsuit over the Renewable Fuel Standard that claims EPA did not account for the “Global Rebound Effect.” “In essence, what the theory suggests is that by using more biofuels in the United States, we’re driving down oil consumption, which results in oil prices decreasing, and because oil prices are lower then people in other parts of the world start using more oil,” Geoff said. “So they’re suggesting that would occur as a result of the RFS 2 and that those emissions should be attributable to biofuels like ethanol.” Since the goal of the RFS2 is to reduce oil consumption, Geoff says they “find it a little questionable that now they would be suggesting that it’s a bad thing that we’re reducing our oil consumption in the U.S. as a result of that policy.”

The theme of the Corn Utilization and Technology Conference was “Corn: America’s Renewable Resource” and Geoff says since this year’s crop is expected to be another big one, increasing markets continues to be important. “Corn is a great crop with a lot of utility, let’s put it to work,” he said.

Listen to an interview Chuck Zimmerman did with Geoff Cooper at CUTC here:

Don’t forget to check out the CUTC Photo Album