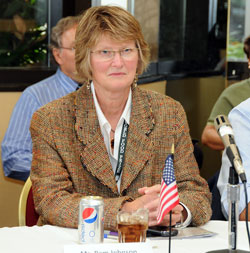 NCGA board member, Pam Johnson, is a northern Iowa corn and soybean grower. She farms with her husband and sons and is one of the participants in the Truth About Trade & Technology, Global Farmer to Farmer Roundtable. She is not only participating in the roundtable discussions but was also on the panel of this morning’s Biodiversity World Tour town hall mtg.

I spoke with Pam before the afternoon roundtable session got underway. She says this discussion has been great for her because farmers share a lot of the same issues and concerns around the world. She thought this morning’s town hall meeting was a good one with an audience that understands that there are a lot of definitions for terms like sustainability. She says that the point was made that farmers are working hard to be productive while maintaining a viable business and taking care of their land and other resources. She hopes that the farmers visiting the United States will take away the idea that they have to be able to operate in an atmosphere where their government policy, the public and consumers work with farmers. In other words, it’s not an “us vs. them” situation.

You can listen to my interview with Pam here: