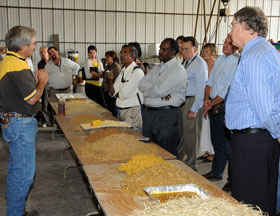 We often hear about friction between the producers of corn and livestock over the growth in the production of ethanol. One Iowa farmer had an idea to diversify his operation and do both! Judging by the tour that the TATT Global Farmer to Farmer Roundtable participants received at his farm, Couser Cattle Company, he’s doing it very successfully.

Our host was Bill Couser. Bill conducted a fascinating presentation about his marriage of row crop farming (corn/soybeans), livestock production and ethanol production! You can see a portion of his explanation in the video below. He used a long table to display all the products he produces starting with an ear of corn and winding up with ethanol (2.81 gal/bushel of corn) as well as by-products like DDGS and ultimately fine quality beef. I loved his description about the whole food vs. fuel debate, “It’s rubbish!”