The federal deficit is currently over $14 trillion, or about $46,000 for every man, woman and child in this country. Everyone is talking about trying to get the deficit under control, but the ethanol industry is actually stepping up and volunteering to do its part in a rational and responsible way.

“The ethanol industry has been proactive in our efforts to reform, unlike the oil and gas industry,” said National Corn Growers Association president Bart Schott following a vote in the Senate Tuesday to defeat an amendment by Sen. Tom Coburn (R-OK) that would have immediately ended the ethanol blenders tax credit (VEETC) and associated tariff. “NCGA supports alternative reform options that will provide a safety net to the industry while reducing the overall cost to the federal government.” 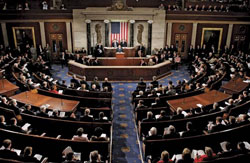 Corn growers and ethanol producers are supporting a different approach to ending the tax credit that would still help the industry move forward and the two concepts could be heading for a showdown in the Senate before the end of the month.

“That indeed has been teed up with a commitment by the majority leader for a vote on Coburn again in a couple of weeks and a vote on an alternative,” said Renewable Fuels Association CEO and President Bob Dinneen.

The alternative is the Ethanol Reform and Deficit Reduction Act introduced this week by Senators John Thune (R-SD) and Amy Klobuchar (D-MN) that would generate $2.5 billion by ending the blenders‚Äô credit or VEETC on July 1, 2011, and allocate $1 billion to deficit reduction and invest $1.5 billion in a blender pump tax credit, cellulosic biofuel tax incentives, a variable VEETC safety-net, and extension of the Small Ethanol Producer Tax Credit.

What other industry is making that kind of a commitment to deficit reduction? It may only be $1 billion, but if other industries (like oil, maybe?) were willing to take a similar hit we could at least make a dent in it.