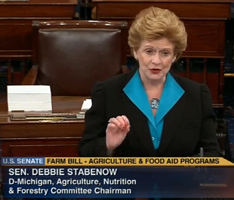 The farm bill game is over in the Senate - again - now that senators have passed the Agriculture Reform, Food and Jobs Act of 2013 by a vote of 66 to 27. Senators stressed that the ball is now in the House court.

“This bill has been bipartisan from start to finish,” said Senate Ag Committee Chairwoman Debbie Stabenow (D-MI). “The House agriculture committee passed a bipartisan farm bill last year but for whatever reason the full House didn’t consider the bill. The good news is this year it looks like it’s going to be different.” Comments by Senator Debbie Stabenow 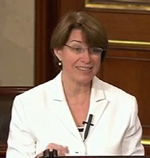 So, can the House do its job so a farm bill can be completed by the end of summer? Representative Vicky Hartzler of Missouri, a member of the House agriculture committee, is hopeful. “Certainly that should be the goal,” says Rep. Hartzler. “I know the leadership of the House Ag and I think the Senate Ag Committee as well want to see this done and wrapped up by August, so we’re certainly going to try.” Interview with Rep. Vicky Hartzler (R-MO)