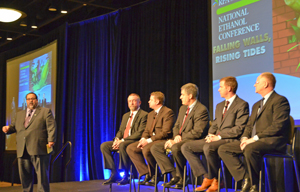 That may seem redundant, but that’s just how important the Renewable Fuel Standard is for corn growers.

Doggett sat on a panel with one of his best lobbyist friends at the National Ethanol Conference this week - Bob Greco of the American Petroleum Institute. 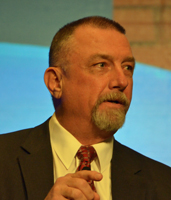 Well, maybe not BEST friends, but Jon says they are friends, although they do disagree on important issues, like the Renewable Fuel Standard (RFS). “I like Bob Greco, I have friends at API, but if any person in this room doesn’t think that they will leap at the chance to get rid of the RFS between now and the election or during the lame duck session - you’re crazy!” said Jon during the panel session, warning the ethanol industry sternly, “Don’t be complacent.”

Besides Greco, Jon shared the annual Washington Insiders panel at NEC with Aaron Whitesel of DuPont, Kris Kiser with the Outdoor Power Equipment Institute, and Shane Karr from the Alliance of Automobile Manufacturers.