The granddaughter of the father of the Green Revolution is carrying on with his mission to help feed the world, and Julie Borlaug believes that must include communicating the benefits of biotechnology on a more personal level. 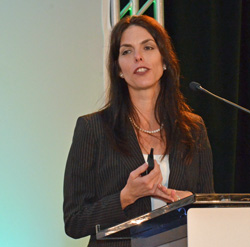 “For years, we in the ag sector have been on the losing end of the argument, partly because we thought we could win the day on science alone and with scientists doing the talking,” said Borlaug, who is Associate Director of External Relations at the Borlaug Institute for International Agriculture, during the Bayer CropScience Ag Issues Forum prior to Commodity Classic last week. “Scientists like my grandfather were unfortunately a lot better at doing science than communicating about it.”

Borlaug says her famous grandfather Dr. Norman Borlaug, who will be honored this month with bronze statue in the U.S. Capitol, had a “lifelong passion for feeding the hungry and miserable” and was a supporter of biotechnology just as she is. But she says that agriculture needs take a more personal approach to talking about biotechnology. “We must remember we are talking to those outside of agriculture who have never been on a farm,” she said. “We are talking to moms who believe everything on Facebook.”

You can listen to Julie’s remarks here: Julie Borlaug Remarks