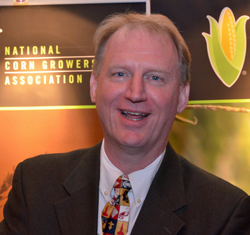 The new CEO of the National Corn Growers Association had his first chance to visit with members of the agricultural media during the National Association of Farm Broadcasting convention last week in Kansas City.

Chris Novak previously served as chief executive officer of the National Pork Board, but prior to that, he was executive director of the Indiana Corn Marketing Council, the Indiana Corn Growers Association and the Indiana Soybean Alliance. So he comes to NCGA with plenty of experience.

“I’ve spent 11 years working on behalf of pork farmers, but I’ve spent more than 10 years working with grain farmers, corn and soybeans, across this country,” he said. “Lots of big challenges ahead for us. Looking at a record crop and lower prices than we’d like to see but that’s an opportunity for me as well.”

Novak sees increasing demand as the most important challenge and opportunity for the industry. “How do we ensure that with a second record crop in a row that we’ve got the demand that can keep our farmers profitable?” he said. The primary demand sectors - livestock, ethanol and exports - all offer new growth potential.

“Certainly EPA’s support and implementation of the renewable fuels law as passed by Congress is going to be important to us in the short term,” he added. “Longer term we’re looking to build consumer demand for a renewable fuel that increases our energy independence and helps reduce greenhouse gases.”

Novak also talked about the proposed Waters of the U.S. rule, the extended comment period for which just ended on Friday, and what he expects from the lame duck session of Congress and the new Congress in January. Interview with Chris Novak, NCGA CEO