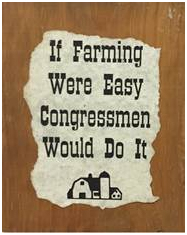 This little saying was in this week’s newsletter from Rep. Collin Peterson (D-MN) - “If farming were easy Congressmen would do it.”

Truly, if farming were easy, everyone would do it - and most of us either can’t or don’t want to. The same could be said for many professions, but most of them don’t have everyone from the president on down trying to tell them how to do their jobs.

If farming were easy, the bureaucrats on the federal to the local level would be doing it themselves instead of making up regulations that make it more difficult to produce food, fiber and fuel.

If farming were easy, the people who are against biotechnology innovations that help produce more food would all be self-sufficiently producing their own daily sustenance.

And if wishes were horses, beggars would ride.