How will agriculture fare under an Obama presidency? In an interview during the campaign with farm broadcaster Stewart Doan of Agri-Pulse, Obama talked about his agricultural policies.

“Number one, I come from an agricultural state,” Obama said. “As you know, Illinois has a lot of corn and a lot of beans and that means that during the time I was in the state legislature as well as in the United States Senate I’ve gotten familiar with agricultural issues and I have consistently been a strong supporter of agricultural issues.”

Obama says he supported the 2008 Farm Bill, “because I think that its important for us to have a strong safety net, food security requires it.” He also supports more reliable disaster relief for farmers and has been a strong supporter of biofuels.

Listen to the Agri-Pulse interview with Obama here:

How about … 40. Of the 802 voters surveyed, only 5 percent were what the pollsters considered farm belters.

But what is truly ridiculous here is the transparency of the bias. Question Three of the poll gives a brief version of boths sides of the issue. But notice how the bias is toward one side:

“Opponents of this corn ethanol mandate say that ethanol production is increasing food prices, produces more net greenhouse gas emissions than conventional gasoline, and contributes to world hunger by converting food to fuel, while doing little to promote energy security. It has been estimated converting the entire U.S. corn crop to ethanol would reduce gasoline consumption by only a few percentage points.”

And then Question Four adds information about the disputed land use research:

“Two new studies, one from Princeton University and the other from the University of Minnesota in cooperation with the Nature Conservancy, found that ethanol contributes more greenhouse gases than conventional gasoline to the atmosphere, while expanded ethanol production encourages habitat destruction.

“Now knowing this, do you believe the ethanol mandate should be…”

No attempt whatsover is made to offer an opposing viewpoint.

Well, it is a political season, and the pollsters are based in Washington, so maybe this survey is just one example of what we have to look forward to in the months ahead. But it’s a shame they stoop to this and cannot rely solely on arguing the facts.

Call from the Combine

The National Corn Growers Association is urging its members nationwide to call their Senators on Thursday October 18 and talk to them about what they would like to see in the 2007 Farm Bill.

“Right now the committee is scheduled to markup the farm bill Oct. 23,” said NCGA President Ron Litterer. “This is the time to let our senators on the agriculture committee know that producers should decide whether to stay with the existing program or utilize a revenue program. It is important to give farmers an option to choose the safety net program that works best for them. Call from Combine is an excellent vehicle for making the voices of the grassroots heard.”

Members nationwide are asked to contact their senators and ask them to include an optional, state-based, revenue countercyclical program in the farm bill.

It is also important to note that the state-based revenue countercyclical program (RCCP) option will not cost additional federal dollars because participating farmers agree to changes in direct payments and in exchange will have a better risk management tool, more affordable crop insurance premiums and at higher levels of coverage.

For more information about Call from the Combine, go to www.ncga.com.

Despite a looming veto threat, the U.S. Senate overwhelmingly passed the Water Resources Development Act (WRDA) conference report Monday evening by a vote of 81-12, making a WRDA victory within grasp.

National Corn Growers Association (NCGA) President Ken McCauley says “It’s unfortunate the administration is threatening veto. Our infrastructure cannot keep pace with demands and is falling apart. We must upgrade the lock system on the Upper Mississippi and Illinois rivers to compete in the global market place. Our hope is the president will take seriously his responsibility to ensure our nation has a safe and viable infrastructure by signing WRDA into law. Ignoring that responsibility is a dangerous gamble.” 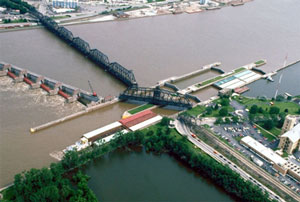 NCGA says a presidential veto will only delay passage of the bill as there is strong congressional support for WRDA and a veto override is likely.

Corn growers nationwide have been long-time advocates for improvements to our inland system. WRDA provides authorization for seven 1,200 foot locks on the Upper Mississippi and Illinois rivers. WRDA is crucial to farmers who depend on the inland waterway system to deliver their crops to the global marketplace and to businesses who rely on the system to move their raw materials and products.

According to Missouri Corn Growers Association president Mike Geske, “The Mississippi River transportation system is key to both exports and imports. We need access to grain and livestock markets around the world, but our cities and towns also need the ability to import basic commodities like steel, building materials and petroleum products.”

It is estimated that 60 percent of U.S. grain exports are transported via the Mississippi River. The construction of seven new locks will help speed barge traffic, allowing farmers and businesses greater access to global markets.

“Countries around the world are upgrading their transportation systems to compete in the international marketplace,” summarizes Geske. “Without these upgrades, the U.S. will not be able to maintain a competitive edge with markets across the globe.” 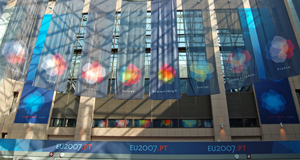 I have been traveling abroad for the past two weeks and getting an international perspective on biofuels which has been very interesting. I have been in Germany, Belgium and Japan and biofuels has been a topic everywhere.

In Brussels I was on a trip sponsored by BASF Ag Products with a group of ag journalists who had the privilege of meeting with the European Commission’s spokesman for agriculture and rural development Michael Mann. “Biofuels is now a major issue, of course,” he said. He discussed the Commission’s plans to have biofuels make up ten percent of transport fuels by the year 2020. “We’ve also set that some of that will have to come from imports and we will also favor in the long term second generation biofuels,” Mann said. “We don’t want too much of our agricultural land to be diverted away from food and feed production. So, its a balance between the importance of biofuels for environmental reasons and to lower our reliance on imported oil, but at the same time not upsetting our food and commodity markets too much.” 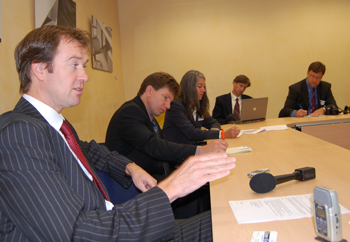 According to Mann, the EU has incentives for rural development of biofuels refineries in place, which are actually grants. “Developing biofuels plants is something you can receive a grant for from rural development funding.” In addition, there is a tariff in place for ethanol imports to the EU and there are incentive payments for farmers to produce crops for biofuels production which was introduced in 2003. “If you have a contract with a biofuel producer to produce the raw materials for biofuel, you can get an extra 45 euros per hectare on that land.” Mann says they are reconsidering that incentive, in light of the OECD criticism of biofuels subsidies and also because there is now a market because the target is in place.

The EU is expected to eliminate its current mandatory 10 percent setaside for the next crop year to allow farmers to produce more for the market and Mann says that of the 3.8 million hectares currently set aside, they estimate about half will go back into production, much of it into corn.

So, Europe is facing some of the same issues we are in the US, which is very interesting. Here in Japan, where I am at a congress for international ag journalists, I am actually getting perspective from all over the world. More on that later.

Meanwhile, you can listen to all of Mann’s remarks about biofuels in the EU here:

Food and fuel. Corn prices. Ethanol. Farm policy. Issues in agriculture. Welcome to Corn Commentary. We’ll be discussing these issues and more. We hope to have some fun along the way so it’s only fitting our inaugural post is related to the power of viral marketing and ethanol.

If you haven’t yet seen the series of ethanol videos on Project Phin, Clean My Ride, Flex My Fuel, you’re missing a great laugh. The star-studded cast touts the benefits of e85, the need for improved ethanol infrastructure and improved mileage standards. Here’s how it got started. You’ll find more on their site.

www.cleanmyride.org has all the elements of a strong grassroots campaign. It’s got a strong message, a catchy theme and a call to action.

We liked Ben Affleck in “Hollywoodland” and have caught his numerous appearances on Saturday Night Live. However, his role as an ear of corn is truly praiseworthy.