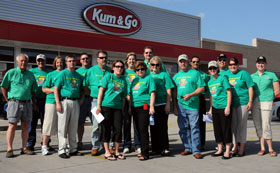 It’s Indy race time in Iowa. The Iowa Corn Indy 250 will take place Sunday afternoon but there are a number of activities leading up to the only race of the season where the cars will be fueled with American made ethanol.

One of those pre-race activities was an E-85 pump grand opening at a Des Moines Kum & Go. On hand to fill up cars were members and staff of the Iowa Corn Growers Association pictured here.

Additionally, drivers Marco Andretti and Ryan Hunter-Reay (who will be in the Ethanol USA Team Izod Car) were there to sign autographs. I interviewed both of them and they had nothing but good things to say about ethanol.

You can listen to my interview with Ryan here:

You can listen to my interview with Marco here:

The drivers had a little fun for the camera before leaving when Marco drove the Iowa Speedway car up to a pump in true Indy Car driver fashion for Ryan to pump E-85 for him.

Team Ethanol Back on the Track

The biggest news out of the 2010 Fuel Ethanol Workshop this week was that Team Ethanol will be back on the racetrack this weekend at the Iowa Corn Indy 250 with Ryan Hunter-Reay at the wheel. The Team Ethanol Indy Car was a successful tool in creating awareness about higher blends of ethanol for many years through the Ethanol Promotion and Information Council (EPIC).

Dave Vander Griend, the founder of ICM and one of the three original sponsors of the Team Ethanol IndyCar program made the announcement at the opening of the FEW 2010 expo. “We thought this is an excellent opportunity to showcase the fact that fuel ethanol is also biodegradable,” Dave said during an interview with Domestic Fuel. “Some of the things that are happening here in the Gulf Coast and some of the issues surrounding this oil spill would not be as severe if there was a higher use of ethanol and a lower use of non biodegradable fuel in our tanks.”

ICM is a title sponsor of the Iowa Corn Indy 250 and will be a supporting sponsor through the remainder of the season. They are also hoping to raise sponsorship dollars so that Team Ethanol can compete in several more races this season.

You can download (mp3) or listen to the Domestic Fuel interview with Dave Vander Griend here.

Looking To Potential Of New Genetics

During the Corn Utilization and Technology Conference, Iowa Corn Promotion Board member, Julius Schaaf, took time between presentations to talk with me. Here’s Julius absorbing some of the great information presented by researchers at this every other year conference.

He thinks CUTC is a great opportunity to bring together so many people who have corn’s interests at heart. He’s feeling pretty good about this year’s crop and looks forward to seeing how the new genetics perform.

I’ll be seeing Julius this week at the Iowa Corn Indy 250 in Newton. The Iowa Corn Growers are sponsoring it once again. He says the race is an opportunity to showcase ethanol on a national level and promote the benefits of clean air and energy independence.

You can download (mp3) and listen to my interview with Julius here:

Don’t forget to check out the CUTC Photo Album