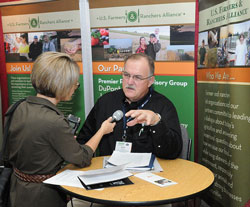 It has only been a year since the U.S. Farmers & Ranchers Alliance was officially announced, and what a year it has been for the coalition of agricultural organizations!

USFRA held its first annual meeting last week in Kansas City just prior to the NAMA Trends in Agriculture and the National Association of Farm Broadcasting annual meeting where board members like Vice Chairman Bart Schott (pictured), who is also chairman of the National Corn Growers Association (NCGA), had a chance to talk with dozens of broadcasters about the accomplishments and goals of USFRA.

NCGA CEO Rick Tolman says it’s amazing to see how much the organization has grown in the 12 short months since the first USFRA board meeting in 2010. “There were 12-15 of us sitting around the table putting this thing together and dreaming what it might be,” Rick said. Now there are more than 20 on the board and another 80 were in attendance. He says they raised over $10 million dollars in the first year and have a second year budget of $11.1 million. “So, it’s really exciting to think of where we came from and where we are in such a short period of time.”

Much of the first annual meeting dealt with plans for 2012 and you can hear all about it in this interview that Chuck Zimmerman did with Rick about the accomplishments and goals of USFRA: Rick Tolman Interview