Corn Grower Leaders On the Air 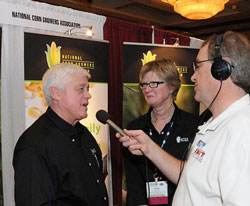 One of the busiest booths at the National Association of Farm Broadcasting Trade Talk last week was the National Corn Growers Association (NCGA), where president Garry Niemeyer of Illinois and first vice president Pam Johnson of Iowa spent the day doing interviews with broadcasters from all over the country.

Among the topics of interest were farm policy, this year’s crop, the American Ethanol partnership with NASCAR, USFRA, exports and atrazine. I hit on just about all of those subjects during my interview with Garry. Here’s some of his comments:

Farm Bill - “Passing farm bills usually takes about 15 months, and ironically, this one - if it happens - will be one of the quickest ever in history.”

Corn Crop - “All the adversity we’ve had, and here we are with the 4th largest corn crop. I’m thoroughly amazed.”

USFRA - “We’ve been laying a lot of the ground work here to get the message out to defend agriculture. We have everybody working together on the same page for the first time, telling our story.”

Trade - “These three free trade agreements give us the impetus to move forward to improve our infrastructure - locks and dams on the Mississippi and Illinois Rivers.”

American Ethanol - “We have been going back over the advertising and we’re at 71% acceptance, that’s with 75 million fans throughout the United States.”

Atrazine - “It’s been a stalwart, it works, it’s inexpensive, it keeps the price of food affordable for the American public.”