Thanksgiving dinner this year will cost more, but it’s still a bargain no matter how you slice it.

According to the American Farm Bureau Federation (AFBF), the retail cost of menu items for a classic Thanksgiving dinner including turkey, stuffing, cranberries, pumpkin pie and all the basic trimmings increased about 13 percent this year. That may seem like a lot, but it still means that the average cost to feed a hungry table of ten is less than $50 - not even five bucks a plate. Try to get that in any other country for the same price! 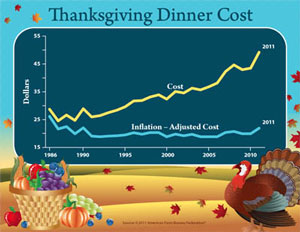 “The quality and variety of food produced for our dinner tables on America’s diverse farms and ranches sets us apart from our contemporaries around the world,” said AFBF President Bob Stallman. “It is an honor for our farm and ranch families to produce the food from our nation’s land for family Thanksgiving celebrations.”

The turkey itself is what gobbled up most of the price increase this year. According to AFBF, a 16-pound turkey will cost about $21.57 this year at $1.35 per pound, an increase of about 25 cents per pound over last year. That triggered some misinformed columnists to start crying fowl and place the blame for the higher price on ethanol.

“Our biofuels policies are a big cause of the rising cost of food in recent years, and it just feels wrong to use food for fuel with so many families struggling to feed their families,” wrote Marie Brill of ActionAid in the Huffington Post, adding that “federal ethanol subsidies … are driving up the price of everything from eggs to milk to — yes, turkeys — and undoubtedly, some families will just have to go without.”

However, AFBF economist John Anderson says it’s more a case of basic economics - supply and demand. “Turkey prices are higher this year primarily due to strong consumer demand both here in the U.S. and globally,” said Anderson.

A more well-rounded and less emotional look at the cost of turkey comes from New York Times’ Wealth Matters columnist Paul Sullivan. “It turns out that turkey pricing is not much tied to commodities prices. Instead, other factors, like tight margins for farmers and perceptions of value, play a much bigger role,” he explains. “For most of us, the price we pay for our turkey bears little relation to what it costs to raise it.”

By the way, if you are into the organic scene, you can expect to pay double the amount for the average Thanksgiving meal, according to the Arizona Farm Bureau. The Organic Thanksgiving dinner with all the trimmings will cost $106.39, with a 16-pound organic turkey at $63.84 or $3.99 per pound. But really, even that is a bargain at just over $10 per person.

So, gobble up and give thanks this week for the most abundant and affordable food supply in the world.