Putting Your Time and Energy Where Your Heart Is 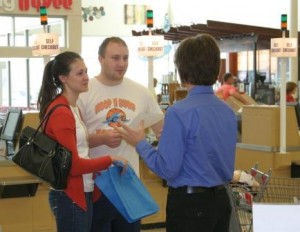 No matter how great a product may be, a bad name can lead to a serious uphill battle.  Veterans of the war to correct misinformation about high fructose corn syrup understand this problem intimately.  Now, cattle ranchers have found that the public may turn on a food ingredient, despite previous clamor for the benefits that it provides, if it goes by the unfortunate nickname of “pink slime.”

As many blog away or create infographics for social media dispersion, Nebraska CommonGround volunteers hit the aisles of a local HyVee grocery store last weekend to speak with customers about what the so-called “pink slime” really is and does in person.

The grocery store, which had previously issued releases and fact sheets about their use of the product, welcomed the women, who brought a more intimate understanding of beef to their discussions than even the meat department employees could offer.

Hurried shoppers took a moment to pause, speaking with women like volunteer and cattlewoman Joan Ruskamp, about not only “pink slime”, but also hormone use in meat production and organics.  Together, the farmers and shoppers alike built a mutual understanding through conversations that highlighted both consumer concerns and shared a rancher’s unique understanding of the meat she produces.

Embracing an opportunity to start real, meaningful conversation, the Nebraska volunteers laid the groundwork needed for an ongoing dialogue about food between the farmers and ranchers who grow it and those who eat it.  Taking a moment out of their packed days, the consumers also played a key role in opening a dialogue sharing their concerns and insight.