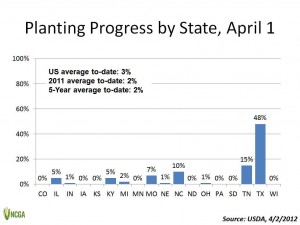 While the numbers released in the U.S. Department of Agriculture’s Crop Progress report might not have appeared stunning at first glance, closer examination shows that farmers across the Corn Belt are planting earlier than normal.  The report, which indicated that planting was three-percent complete nationally, showed corn planting progress prior to the first or second Sunday in April for the first time in 32 years.

What will this mean?  Possibly nothing, but, then again, it could indicate a variety of outcomes for the 2012 crop.

Higher-than-normal soil temperatures and favorable soil moisture across the Midwest, which weather forecasts suggest will persist, could provide an early window for rapid progress and germination.

For two years now, farmers in many areas have seen lower-than-expected yields due to weather difficulties.  While early, the possibility that 2012 will usher in more favorable conditions and a more bountiful crop is certainly welcome.

Coupling the optimistic outlook early planting demonstrates with estimates that more acres will be planted to corn than since 1937, it becomes possible to envision an abundant harvest this fall.

As any veteran agriculturalist understands, fall remains far in the distance and many troubles could still impede progress.  Just for a moment though, many feel a warm sun beating on their backs as, like every year, they toil in their fields in the hopes that this year will prove better than the last.