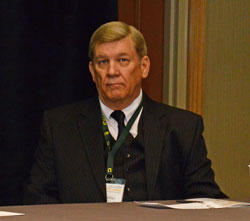 Attendees at the recent Corn Utilization Technology Conference got to hear a discussion on how the effects of aflatoxins can be mitigated in human and animal feed. “We’re interested in using clay-based materials that actually bind aflatoxins very tightly and somewhat preferentially in the stomach and intestines of animals and humans,” said Timothy Phillips, Ph.D., from Texas A&M University, who chaired the session on mitigating aflatoxins. He went on to explain that aflatoxins are hard to detect, so they are hoping to employ the clays in food to lower the effects of the toxins. “If these clays could be added to animal feed or human foods, or even condiments such salt, [just like adding iodine,] then this will help us to manage the problem.”

Phillips says using these clays to mitigate the effects of toxins is nothing new. “Clays have been used for centuries. Actually, the first reports were in Mesopotamia about 2,500 years ago. We’re excited about using this old medicine and bringing it to a contemporary point.” There’s still some more tests, studies and FDA approvals that need to get done, but he believes it could be a big help for human health, especially in some developing countries.