We’re really quite lucky Matt Stasiewicz didn’t decide to become an automotive engineer. The work he’s done for agriculture is extensive and valuable for human health. Not that understanding engines isn’t important work, but creating a single-kernel sorter to reduce mycotoxin levels in market corn from Eastern Kenya, might be a bit more life-changing.

Stasiewicz originally enrolled at Michigan State as an engineering student. He was good at science and math, but he quickly realized that Michigan State’s engineering program focused mostly on automotive engines and he was not all that excited about cars. So he thought about what he could do to help people and what his interests were.

“What is immediately good for people? Food.” 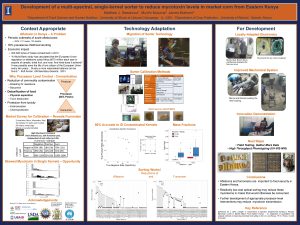 Stasiewicz chose to study food process engineering at Michigan State because he recognized that food is obviously a necessity to human life.

In this program, Stasiewicz had the opportunity to travel to Africa to learn first-hand the connection between food safety and poverty. According to the United Nations, one in nine people in the world are undernourished. That is 795 million people not getting enough nutrients in their diet and that poor nutrition leads to the deaths of 3.1 million children each year around the world. Up to 80 percent of food consumed in a large portion of the developing worlds, comes from 500 million small farms across the globe.

After returning home, Stasiewicz wanted to apply some of the applications he learned abroad to make a difference for other developing countries. “Corn is a staple. It is all they can afford, therefore it exposes them to aflatoxin more so than in other countries.”

Stasiewicz works at the University of Illinois as an assistant professor of food microbiology. He never would have guess he’d be living in the Corn Belt, but he’s thankful that it grants him this opportunity to study a branch of agriculture, “Where I work, it’s the right thing to work on. Corn is so prevalent in the modern food system. The scope of corn can be applied in many places.”

As someone who also studied philosophy and the ethics of technology during his undergraduate degree, Stasiewicz understands and has interfaced with the public about how modern technology and farming are changing and about their intersection. He understands that most consumers have the right to eat what they want and it is perfectly reasonable to accept that.

“The conversation should not just be about the food that we eat, it should also be about the system of making the food that we eat.” AKA farmers. “No one is in this to make biotechnology that causes harm to people,” Stasiewicz says. “It is easy for the general public to debate food and safety in turn, missing this fact.” He recognizes the importance of food choice no matter if someone drives a Lexus for dinner into the city or has to walk a mile just to collect water.

At the NCGA’s recent Corn Utilization and Technology Conference, Stasiewicz shared the research he has been working on, studying aflatoxins in Kenya. He researched the quality and safety of grain, screened for aflatoxins and understood that the distributions of aflatoxin were skewed, meaning that some of the kernels were “bad” and some were “good.” With that knowledge, he created a single-kernel sorter that segregates kernels of corn containing aflatoxins. His system uses circuits with LED lights to determine if there is aflatoxin present and uses a puff of air to push away the “bad kernels” to separate them from the good. His hope is to make a larger scale, rapid-scanning system that would one day used in grain elevators to sort the corn prior to being grinded. If successful, Stasiewicz can help reduce the amount of corn wasted and help supply more people and livestock with safe corn.

“It is important to make progress in the world. I’m fortunate I fell into a world of food safety where I can help,” Stasiewicz says. “It’s very fun to be at a land-grant university. I get to teach other people to do good work.”