Fuel By Any Other Name

It’s been called alcohol, gasohol, and ethanol, among other names - but could a different moniker help improve the image of plant-based fuel? 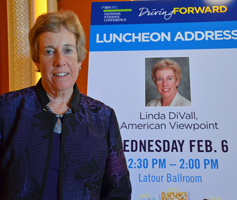 The founder of a widely respected public opinion research firm suggests that calling ethanol a “biofuel” more often might be better.

DiVall presented findings from a poll on consumer views of ethanol commissioned by the Renewable Fuels Association (RFA) at the National Ethanol Conference last week. “The ethanol industry has a compelling narrative to advance to consumers — it significantly reduces greenhouse gases, lowers our dependence on foreign oil, creates quality jobs, reduces fuel costs for Americans, and is serving to advance further innovations in renewable fuels.”

Listen to DiVall explain in this interview: Linda DiVall at NEC 2013