Will Drought Continue in 2013?

The good news is that the overall drought area in the U.S. is continuing to decline from week to week. The bad news is that 2013 may be even drier than 2012 was.

The latest U.S. drought monitor shows less than 56% of the country in drought now, the lowest point since last July. “It’s also a decline of 5.36% since the beginning of the year and we’re down almost 10% from the peak in 2012,” said USDA Meteorologist Brad Rippey. “It is noticeable change but the problem is we’ve really been struggling to chip away at the drought right at the core.” 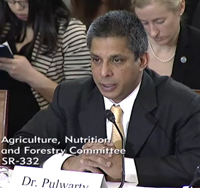 “The forecast for this season is that in fact, we are predicting drier conditions,” said Dr. Roger Pulwarty, Director of the National Integrated Drought Information System at the National Oceanic and Atmospheric Administration, during a Senate Agriculture Committee hearing last week.

Pulwarty emphasized that the big problem last year was the heat exacerbating the drought. “The major issue in the Midwest and the Southwest, Colorado Basin in particular, is that we are having back-to-back dry years and a third year of that puts our systems completely under stress,” he said. 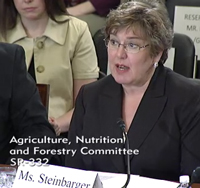 Indiana farmer Anngie Steinbarger was one of four producers on a panel who explained just how bad the drought was last year. “Our average yields are 150 bushels for corn,” she said, explaining that their decision to add an irrigation pivot on 35 acres of really sandy soil is what helped them get a crop last year. “Under the pivot was close to 200 bushels per acre and outside of the pivot was 10 bushels per acre,” said Steinbarger, adding that “The number one barrier to increasing our yields is lack of water.”