Growing corn in areas where water is scarce and soil is toxic may soon be a reality thanks to research being done at major universities. 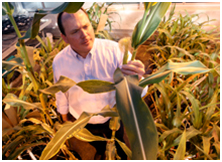 Purdue University scientists recently received a grant of over $1 million to find ways to increase corn tolerance to heat, which would help farmers in this country when we have a drought like last year, but would be a real boon for farmers in Asia. The work will be done through the International Maize and Wheat Improvement Center with funding from the U.S. Agency for International Development.

Purdue professor Mitch Tuinstra (pictured) said finding ways to grow maize in the hotter climates of South Asia could help combat malnutrition and hunger issues in those countries. Understanding ways to adapt the crop to heat and drought could also help growers in the United States where climate change is expected to increase stress on crops. “There is a lot of concern about how climate change will affect crops, but we know almost nothing about thermal tolerance in corn,” Tuinstra said. 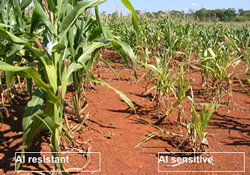 Meanwhile, over at Cornell University, researchers are working to grow stress-tolerant crops on formerly non-farmable land with high levels of toxic aluminum in the soil.

Plant scientists searched the maize genome for clues as to why some plants can tolerate toxic aluminum and found three copies of the same gene known to affect aluminum tolerance, according to new USDA/Cornell-led research.

Acidic soils dissolve aluminum from clays in the soil, making it toxic to plant roots in half the world’s arable lands. The MATE1 gene, which was found in triplicate in aluminum-tolerant maize, turns on in the presence of aluminum ions and expresses a protein that transports citric acid from root tips into the soil, which binds to and locks up aluminum, thereby preventing it from harming roots.