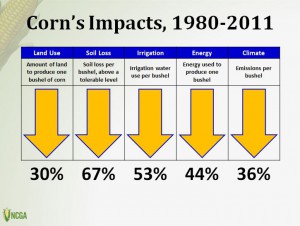 A story in today’s New York Times cites a new study by the World Resource Institute that attempts to discredit the significant and increasing contributions of biofuels to meet the world’s energy needs. On close inspection two things become abundantly clear.

First the so-called “new” study is nothing but the same old stuff trotted out by the anti-ethanol crowd nearly annually to see if any of the misinformation sticks to the wall. Take the wig and mustache off and it’s the same old pig.

Second, the former journalist in me always says to consider the veracity of the source to validate the data. In this case the World Resource Institute is funded by Shell and Statoil, two of the world’s largest oil companies. Always follow the money.

This fraudulent study has more holes than a colander but to address some of the most egregious point by point:

Ethanol production is not inefficient? Some of the best research to date from the University of Illinois Chicago shows you get a 40% net energy gain from ethanol production compared to all the energy used along the production chain from farm to gas pump.

The article begs the question why have so many invested billions of dollars in biofuels if they are a bad idea with no future? They do so because ethanol is a plug and play fuel source that meets the needs of our transportation fleet today. What makes it even more attractive is the bright future for biofuels. Automakers in Detroit make no secret of the fact that the next generation power plant for cars will be smaller, higher compression engines. And the best fuel for this future automotive technology is octane rich ethanol.

It also becomes abundantly clear that these think tank folks might want to meander outside the Washington, DC beltway and visit a farm. They question the percentage of the corn crop being used for ethanol today. It’s not how much of the crop we are using for biofuels but how large the crop has gotten. We have grown the largest 11 corn crops in history in the last 11 years. We currently have the largest carryout (supply of corn) ever so feedstock is abundant to meet all demand for corn.

And all of the above has been accomplished in the US on virtually the same acreage, and with less environmental impact. This is an amazing accomplishment that should make all Americans proud.