Seven commodity and ethanol organizations have written a letter to President Bush in support of the secondary tariff on imported ethanol. The groups called attention to the importance of the tariff for the nation’s growing ethanol industry, as well as to the nation’s energy, economic, and environmental security.

“The 54 cent per gallon secondary tariff was enacted by Congress in 1980 to offset any incentive for imported ethanol to benefit from the 54 cent per gallon tax credit for ethanol blended into motor fuel,” the letter said. “This tax credit is taken by refiners who blend ethanol into motor fuel, not ethanol producers. The purpose of the secondary tariff is to protect American taxpayers from subsidizing imports, not to protect domestic ethanol producers.”

The letter points to factors such as oil prices, rising demand, drought, and declining value of the dollar as having more effect on the price of food than biofuels. They urged the President to avoid yielding to the misdirected efforts to blame ethanol for rising prices and to prevent American taxpayers from subsidizing foreign products.

Farm Bill Drags On and On and On

“If farmers ran their business like we’re running this Farm Bill negotiation, we wouldn’t have any food to eat.”

That statement from Congressman Randy Neugebauer (R-TX) pretty well sums up the frustration felt by farmers and some lawmakers at this point with planting season here and no farm bill.

Congress got another one week extension of the current farm bill to try and get a new bill passed this week, but it is looking more and more like a long term extension of current legislation will be the end result.

Optimism was starting to sound a bit hollow on Friday when Senate Agriculture Committee Chairman Tom Harkin (D-IA) called progress on the legislation “incremental at best” with funding of the bill continuing to be a stumbling block.

Senator Saxby Chambliss (R-GA), the ranking member of the Senate Agriculture Committee, tried to sound optimistic. “Hopefully by the time Tuesday morning rolls around here, some kind of progress has been made.”

President Bush expressed great reluctance to extend the current bill another week, but gave Congress the benefit of the doubt and signed the extension Friday. USDA Deputy Secretary Chuck Conner says he did it to avoid reverting to the archaic 1949 farm law. “We owe it to the producers to not do anything that would be that disruptive,” said Conner.

However, unless significant progress is made within the next day or so, an extension of the current farm bill for another year at least seems the best course of action to give farmers some sense of security as they head to the fields.

Show Me the Ethanol

Missouri is prepared for a law requiring a ten percent ethanol blend to kick in next week.

According to an article in the Kansas City Star, most of the gasoline sold in Missouri already being blended with ethanol.

The law “sent a tremendous signal,” said Gary Marshall, chief executive officer of the Missouri Corn Growers Association, and E-10 now meets about 90 percent of the demand for gasoline in the state.

F. J. Cronenwett, director of wholesale fuels for Robson Oil, which supplies several area gas stations, said that most fuel retailers in Missouri and Kansas were using E-10 because of the lower price and were even using an ethanol blend when they buy premium fuel, which won’t be required under the Missouri law.

Check out a map of Missouri’s ethanol production from the MCGA here.

The Senate fell one vote short in a procedural vote to move the Energy Bill passed by the House that includes tax increases for oil companies. The White House had threatened to veto the bill over that issue.

Majority Leader Harry Reid now says they will eliminate the tax title to get a revised energy package approved later today. “We must begin to break our country’s addiction to oil,” Reid said.

The bill will still include an increased Renewable Fuels Standard and higher CAFE standards.

The legislation, if passed by the Senate, would have to be voted on by the House.

The energy bill was on a roll after passing the House Thursday, but a failed vote to end debate in the Senate puts the bill back in limbo.

In urging Senators to block a vote on the bill, Sen. Pete Domenici of New Mexico, the ranking Republican on the Senate Energy and Natural Resources Committee, argued: “This is not a good bill, but it can be turned into a great bill.”

The White House threatened a veto over the bill which includes increased taxes for oil companies and requires utilities to generate more electricity from sources such as solar and wind energy.

Meanwhile, the Senate got back to work on the farm bill this morning after reaching a deal that will allow 20 amendments from each party.

Getting Closer To New Energy Legislation

Yesterday the House of Representatives passed H.R. 6, The Energy Independence and Security Act. NCGA like many other farm groups applauded the move. The House bill includes a 36 billion-gallon Renewable Fuels Standard (RFS) with 15 billion gallons for corn based ethanol.

“NCGA is excited about the 15 billion-gallon expanded RFS for grains-based ethanol that the leadership included in the House package,” said NCGA President Ron Litterer. “We hope to see the RFS quickly move through the Senate and to the president’s desk. The passage of the RFS is our number one priority.”

The following are key provisions of the House energy bill:

Now it’s on to the Senate where things may not be quite as easy and the White House which is apparently not currently favorable to the House bill. This is what makes life interesting isn’t it?

Members of Congress and representatives from a variety of organizations held a media event Wednesday morning in support of an increased Renewable Fuels Standard (RFS) in the Energy Bill.

Congressman Eliot Engel (D-NY) described his conversion to being an ethanol supporter. “As a member of the Energy and Commerce Committee for many years I voted against the ethanol mandate,” Engel said. “I changed my position 180 degrees, and I changed my position because it’s good for America.”

All of the speakers noted the importance of the RFS to cellulosic ethanol development, which is still in its infancy. In the meantime, Congresswoman Stephanie Herseth Sandlin (D-SD) said, “Conventional corn ethanol is the bridge we need to move forward.”

It was a long press conference, which got underway late, and the lawmakers had to leave by the time the supporting organizations got to give their statements. National Corn Growers Association President Ken McCauley “batted cleanup” and wrapped up the event.

“We looked into our crystal ball and actually saw that we could do 15 billion gallons of ethanol from corn and still have enough left to provide food, feed, fuel and exports to feed the rest of the world,” McCauley said.

With less than three weeks left for the 110th Congress, the Energy Bill is suddenly back in action and groups are mobilizing on both sides over the Renewable Fuel Standard (RFS).

That would be the people you would expect to support the RFS. Others who will be showing support for the RFS include AMVETS, the Jewish Council for Public Affairs and the Truman National Security Project.

Meanwhile, petroleum companies have joined forces with livestock producers to protest higher corn-based ethanol targets in the RFS. The American Farmland Trust has sent a letter to Congress opposing the Senate RFS and the proposed RFS amendment to the Farm Bill in the Senate on the basis of conservation concerns.

As if that were not enough, the White House is objecting to the RFS language and there are indications the president may veto the bill even if it does get passed.

The RFS under discussion would require 36 billion gallons of ethanol and other biofuels to be produced by 2022, with more than 20 billion of that to come from sources other than corn. The RFS for corn ethanol would be increased to 15 billion gallons.

While we’re on the subject of video clips from the recent National Association of Farm Broadcasting here’s my final one with NCGA Chairman Ken McCauley. With the Senate back in session and expected to consider new energy legislation I thought it was timely to provide his perspective on where things stand.

Ken says he’s really optimistic about getting new energy legislation, especially a new Renewable Fuels Standard (RFS). He thinks that the price of oil is sending a strong message that we need a renewable fuel source. That’s creating a sense of urgency on Capitol Hill that may move things forward quickly. He says that corn growers want to do their part in helping America become energy independent. 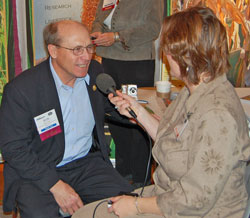 At last week’s National Association of Farm Broadcasting convention, NCGA President Ron Litterer did a number of interviews including one with me about the farm bill.

In the picture Ron’s being interviewed by one of the many farm broadcasters that came by the NCGA booth.

I asked Ron where things stand from a corn grower perspective. It was really dark in the room so I apologize for the quality of the video but it works. I’m also posting the audio of the interview separately for you.

Ron says he feels good that the Senate ag committee has put forward a revenue based proposal but that it would have been nice to see crop insurance integration included. Ron mentions the cloture vote that failed last week so it looks like it’s time for some more debate after the holiday.