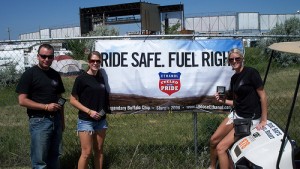 The Market Development Team of the Renewable Fuels Association stands near one of their banners during the 2009 Sturgis Rally at the Legendary Buffalo Chip Campground, just East of Sturgis, SD. www.ChooseEthanol.com

Thousands of Harley motorcycle riders from across the nation got an education on corn-based ethanol last week as Robert White and other representatives of the Renewable Fuels Association participated in the popular event known as Sturgis.

The effort to reach out to small engine and motorcycle enthusiasts about ethanol proved wildly successful with an estimated 500,000 consumers touched by the project.

T-shirts, information cards and good old fashioned face-to-face promotion provided ample opportunities to discuss the benefits of using a homegrown fuel. The key points being that it is a domestic product, it is cleaner-burning and it is made from renewable sources.

“We also had 25 static displays, which encouraged riders to, “Ride Safe, Fuel Right.” The event also provided a backdrop to launch a Sturgis Photo Contest at www.e85challenge.com, where riders can win $1,000 for submitting their favorite rally photo. Each night concert goers were able to see ethanol information on the jumbotrons during such acts as Toby Keith and Aerosmith,” White said.

“A cross-section of America attends this event and they shared something in common besides Harley motorcycles. They believed that having a renewable fuel like ethanol that is available today and can safely be used in their motorcycles is important,” he said.

Congratulations from the nation’s corn growers on this great effort.