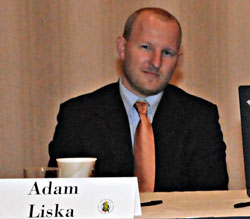 The Land Use Conundrum . . . Corn, An Advanced Biofuel? That was the title of one of the sessions at the recent Corn Utilization and Technology Conference that was moderated by Jamey Cline, NCGA. One of his panelists was Adam Liska, University of Nebraska-Lincoln. His remarks were on “Uncertainty in Indirect Land Use Change Emissions from Biofuels.” Adam has focused his work on the life cycle efficiency of producing ethanol.

Adam says that there has been increased agricultural production worldwide due to increased demand and it seems like attributing some of that to increased biofuels production makes sense. However, he says that quantifying the emissions related to agricultural production due to biofuels use is very uncertain because it’s done “as a projection into the future.” The bottom line is we don’t know what will happen in the future. He says “it’s nearly impossible.” He says that there are estimates for corn ethanol but they get smaller and smaller with more research and information. He says that they’ve started to do some research on the indirect effects of gasoline production and figure they’re roughly equivalent to that of ethanol. He also points to the impact of changes in livestock production as a result of higher grain prices and says it may have more impact than land use changes. Seems like there is a huge amount of variability in how you look at the future when it comes to biofuels production and especially corn ethanol.

You can download (mp3) and listen to my interview with Adam here: