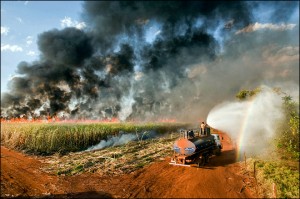 A recent study attempted to make the case that if the U.S. government allowed the ethanol tax credit to expire it would have very few adverse consequences for the U.S. industry. The fact the study was funded by the Brazilian sugarcane ethanol industry was dutifully avoided.

Anti-ethanol folks, who have been receiving a lot of attention on this blog of late, made sure the study got plenty of media splash because it helped them further their own causes. Interesting they didn’t showcase the source of the funding for the study or point out how badly Brazil’s sugarcane ethanol industry lusts after access to the world’s largest ethanol market…the USA.

And in today’s budget conscious environment in Washington, DC their efforts are getting some traction. The direct cost of the ethanol incentives is being reviewed independently without any comparative assessment to savings in farm bill costs, how much we spend militarily on protecting our petroleum shipping lanes, or the economic fallout from depending on foreign oil. Federal tax revenue generated by the production and use of U.S. ethanol totaled more than $8 billion in 2009, $3 billion more than the value of the tax credit.

It is amazing how quickly some of our elected officials have forgotten the core rationale for putting the US ethanol tax credit in place. President Ronald Reagan, who was not exactly a political Dove, regularly noted it is in America’s best interest to reduce the world’s dependency on oil from unstable regions of the world.

That’s why Reagan and virtually every president since has asked domestic alternative energy producers like ethanol to step up. He also noted the expense related to America’s foreign oil addiction and how helpful bringing these energy jobs and the billions of dollars ($1 billion day) we send overseas could be for the U.S. economy.

Despite this clarion call the aforementioned detractors, which mysteriously enough include some environmental groups, like to preach the benefits of sugarcane ethanol; sometimes called “slash-and burn ethanol.”(See attached photo). It’s even more amazing some U.S. regulatory agencies actually tout Brazilian ethanol as an “advanced biofuel over the American made corn product.  In case you were wondering the photo shows a burning cane field in Brazil. The Sao Paulo area alone burns 8,000 sq miles of field producing incredible amounts of volatile compounds and particulates.

To make harvesting easier, which reduces manual labor costs, sugarcane fields are burned prior to harvest to remove the plants’ leaves. Considering the near slave labor conditions in some cane fields I guess this burning might seem a gift for the machete wielding masses, despite the obvious environmental costs of the massive burning.

If critics are truly concerned about our fuel needs and specific environmental and economic consequences consider the following:

Data from the Brazilian sugar organizations clearly shows they are planning, by 2020, to export 63% more sugar and export 336% more ethanol – all at the expense of increasing the land area required for sugarcane by 78%. Corn based ethanol is being provided with increased corn yields on the same acreage and using modern production processes throughout the production chain.

And the next time you want to get on a soapbox promoting sugarcane ethanol consider the following items below which are being ignored to make Brazilian product look better than it is:

At the end of the day if the U.S. ends up importing more ethanol, then we will once again lose a domestic growth industry, export American jobs, and become dependent on foreign energy producers.