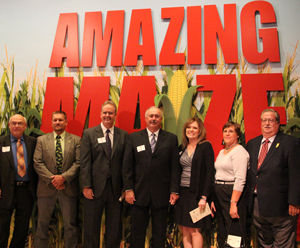 After over five years in development the Indiana State Museum has officially opened up “Amazing Maize: The Science, History and Culture of Corn.” The exhibit will run for the next 16 months at the museum in Indianapolis, during which time the city will host two National FFA Conventions and the Super Bowl.

The exhibit highlights the 10,000 year “genetic journey” that is the evolution of ancient maize to our modern day corn. “It’s all about corn,” said Jane Ade Stevens, executive director of Indiana Corn Marketing Council. “Corn, or maize, is one of the most important crops in the world,” she says. “Our civilization was really started in part because of maize.” 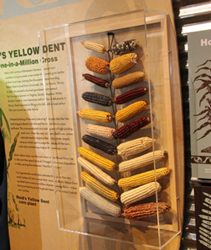 Having the exhibit in Indianapolis for the 2012 Super Bowl provides a great opportunity for the exhibit to reach a large audience. “We plan to have farmers here during that time with shirts on that say they’re farmers so that when people come through here for the Super Bowl, farmers are going to be right there in the middle of it,” Jane said.

Through six different sections, the exhibit highlights the 4,200 different uses for corn, features artifacts such as hand-powered farm tools, stone and wood corn grinders, and examples of dozens of different species of corn, leading up to how present-day genetic modifications have improved productivity of the crop.

Brownfield Ag News Indiana Farm Director Meghan Grebner was at the museum for the opening of the exhibit on Saturday and provided the interview with Jane and the photos. Thanks, Meghan!

You can listen to her entire interview with Jane here: Meghan Grebner Interviews Jane Ade Stevens