Corn Production in the Pacific Northwest

Idaho is synonymous with potatoes, but more corn is in the ground there these days to support a growing dairy industry. 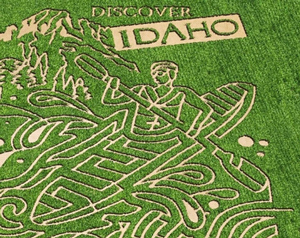 Even though Idaho and other Pacific Northwest states combined currently make up less than 2% of the nation’s total corn production, scientists with USDA’s Agricultural Research Service are studying soil moisture levels and other field dynamics to help farmers in that area maximize production of the relatively new regional crop.

To do so, they conducted a two-year study at the ARS Northwest Irrigation and Soils Research Laboratory in Kimberly, Idaho to see if farmers who use conventional tillage and fertilizer application methods could increase corn yields by banding fertilizer with strip tillage instead.

The scientists found that using strip tillage and placing fertilizers 6 to 8 inches directly below the seed increased corn grain yields on the higher elevations-where severely eroded soils were largely devoid of crop nutrients-by 12 percent the first year and 26 percent the second year. This translated into yield increases between 11 and 26 bushels per acre.

Could this be the start of a new Corn Belt? Probably not, but it could mean increasing production in an area of the country better known for potatoes than corn.