By now everyone has got to be sick of hearing about the so-called “pink slime” in beef - which is actually just beef - but this terrible example of misleading media reporting can probably be called the most damaging attack on the production of food in this country to date. It’s similar to the attack on high fructose corn syrup, only at high speed, with faster and more direct consequences.

In today’s tough economy, this attack has resulted in the closing of plants and has put hundreds of people out of work. Iowa Governor Terry Branstad minced no words when he called the media reports about a perfectly safe product “poisonous.”

A lot more poisonous than Lean Finely Textured Beef (LFTB) - the correct term for the product that has been included to lower the fat content in ground beef for over 30 years. It is the epitome of yellow journalism, which is characterized by the use of “misleading headlines, pseudo-science, and a parade of false learning from so-called experts.” 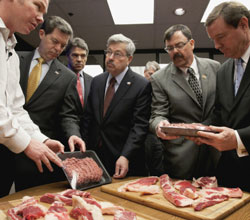 Agriculture Secretary Tom Vilack, Branstad and other governors of beef-producing states are making a valiant effort to get the correct information out about the product. “The time for bad-mouthing and distortion is over, the time for the truth to prevail and combat this ugly situation is here,” said Governor Branstad. “This is something that will definitely hurt all of agriculture because corn and soybeans also go into what the cattle eat. So it has a ripple effect.”

Despite the fact that the governors led major national news organizations on a tour of Beef Products Incorporation (BPI) to show how the product was made and consume some on camera, the damage that the term “pink slime” has done may already be out of control. “If you called it finely textured lean beef, would we be here?” asked Kansas Gov. Sam Brownback during the media tour.

The National Meat Association says if the product is ultimately eliminated entirely from ground beef, prices will go up and lean beef trimmings will have to be imported to replace it. LFTB helps increase the yield of meat from each animal by as much as 12 to 15 pounds.

It is almost amazing how many legs this story grew after the initial report coining the term “pink slime” was aired by ABC News on March 7. We can all thank a former USDA “whistle-blower” and ABC News for job losses, higher meat costs, and less lean ground beef to contribute to more obesity - not to mention a gross new term for our vocabulary. Certainly not the first time and probably not the last that agriculture gets slimed by the media.