Google “save the rainforest” and watch all the organizations that pop up; everything from the World Rainforest Fund to Kids Saving the Rainforest.  I don’t have a problem with that because rainforests are a critical cog in the blue planet’s eco-system.

Rainforests provide incredible biodiversity and through the process of photosynthesis they also provide the duel function of removing carbon dioxide from the atmosphere and converting it to life-sustaining oxygen. Then I realized most the American public has a rudimentary understanding of  the importance of the Amazon on another continent but has little understanding of the contributions our corn crop makes just from the process of simply growing.  It was the accompany image that got me thinking. 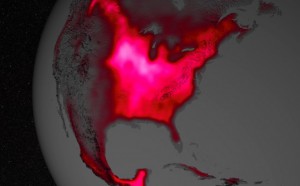 The image from NASA’s Goddard Space Flight Center represents satellite measurements of plant fluorescence.  It represents a compilation of data collected over a four year period. During photosynthesis, the chlorophyll in healthy plants absorbs light to be converted into energy, but it also emits a little bit of light that’s not visible to the human eye. Scientists have now figured out how to use that fluorescent glow to measure the productivity of plants in a given region.

What it reflects is a startling revelation even to a corn-o-phile like me. Using existing data from satellites designed for entirely different purposes, such as ozone monitoring, NASA scientists were able to show that during the Northern Hemisphere’s growing season, the Midwestern U.S. has more photosynthetic activity than anywhere else on the planet, including the Amazon rainforest. Nearly all of this can be attributed to agriculture, and much of it to corn.

So, feeding people aside, providing cleaner ethanol fuel aside, corn takes bad things out of the air much like a tree and gives us oxygen to breathe.  So I want to start a new organization called Save the Corn….or maybe that should be corn farmers?