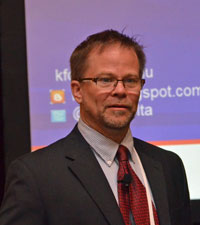 Folta, who has a blog where he calls himself “a scientist in a scientifically illiterate nation at a time when we need science the most,” took the Food Babe to task on social media after she made an appearance on his home turf at the University of Florida. “She misinformed our students, said stuff that was just not true, she made chemistry and safe food additives look bad,” he said. “It was a promotion for her and really an unfortunate one because I really believe her heart’s in the right place but she gave our students bad information - and not on my watch.”

Folta was prepared to challenge her at the forum where she spoke, but since she did not take questions as expected, he did a blog post to refute her and he stresses the importance of food being a social debate. “Dr. Oz has an audience of five million people every day, I have an audience of a dozen,” he said. “We have to amplify our message by getting more of us involved.”