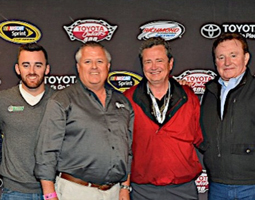 Dillon, who has been advocating the benefits of ethanol for three years now, drove his first American Ethanol paint of the 2015 racing season in the Saturday Toyota Owners 400 race, which was delayed by rain until Sunday. While he finished 27th in the race, ethanol still came in first.

During a press conference on Saturday, National Corn Growers Association President Chip Bowling talked about what the American Ethanol partnership has meant for American farmers. “E15 American Ethanol turns our unrivaled ability to produce corn into a national asset. Consumer demand for ethanol is good for family farmers and fans appreciate that,” said Bowling. “We have grown the 12 largest corn crops in history in the last 12 years so ethanol demand is critical. It means farmers can pay their bills, reinvest in the broader economy and keep family operations like mine viable for future generations.”

Bowling added that according to a 2014 study, NASCAR fans are over 75 percent more likely than non-fans to support the use of ethanol blended with gasoline to fuel their own car.