You might remember the turnout in December 2013 at an EPA hearing after the release of the recalled 2014 volume obligations (RVO) under the Renewable Fuel Standard (RFS). Over 100 people from across the country testified on behalf of the RFS. That hearing was held near Washington DC. Imagine what the turnout will be like on June 25 for a hearing on the new and improved EPA proposal that will be held in the heart of the Heartland - Kansas City. 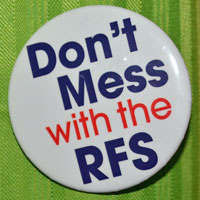 The industry is already planning to be out in force. “I hope the EPA hears loud and clear from farmers and consumers and biofuels producers about what this proposal really does,” said Renewable Fuels Association president and CEO Bob Dinneen, who spoke passionately at the Fuel Ethanol Workshop last week about all of the ways EPA has worked against biofuels and agriculture. “There’s something desperately wrong with the EPA,” said Dinneen adding that they “seem to have a war on farmers. RFA CEO Bob Dinneen comments at FEW

“We want everybody in the world to show up there,” says Growth Energy CEO Tom Buis of the June 25 hearing. “Everyone ought to weigh in.”

“They got the first one wrong a year and a half ago, they got this one wrong,” said Buis. “We stopped the last one, we’re going to change this one.” Interview with Growth Energy CEO Tom Buis at FEW

American Coalition for Ethanol (ACE) Executive Vice President Brian Jennings says they plan to show the power of the people in this industry at the hearing. “We’re going to get a bunch of retailers who are selling E15 and E85 to go to that hearing and tell EPA face-to-face that the blend wall isn’t real,” said Jennings. “We’re going to make sure we get some very persuasive messengers to come deliver a very compelling message to that hearing.” Interview with ACE Executive VP Brian Jennings at FEW

Details about the hearing are expected to be published in the Federal Register this week. The proposal will be open for public comment until July 27.