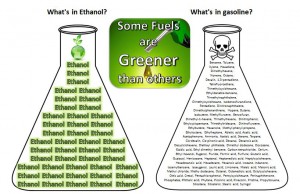 (This guest blog is provided by Matt Reese who writes for Ohio’s Country Journal).

It can be really hard to know which way to feel about some issues because these days it seems everyone has their own set of “facts” that conclusively proves their point. The problem, of course, is that as soon as you conclusively prove a point, you run into someone else who has an entirely different set of facts that definitively proves their point, which happens to be the opposite view of the first point that was proven. Confused yet? I know I am.

One only has to sit and listen to a political debate on any issue between any candidates of any party to get all caught up in a muddled mess of my-facts-versus-your-facts. Then there is often a behind-the-scenes reporter who does a fact check on the aforementioned facts to clarify the situation. Unfortunately, more often than not, these fact checks often just compound the problem by providing another opportunity to spin the issue with a set of suspect facts about the facts.

Of course, in my line of work I see this all the time in great detail with the wide variety of complicated issues facing food and agriculture. This is certainly true in the current debate over the Environmental Protection Agency’s impending decision about the levels set in the Renewable Fuel Standard (RFS). The recent story by Joel Penhorwood on this issue highlights the divergent facts in the RFS debate. Here is an excerpt:

“I think these guys sometimes get lost in this weird, parallel universe in which they actually convince themselves that this mountain of damning, definitive science and data about corn ethanol’s environmental impact doesn’t exist, or that folks don’t actually know about it,” Banks said in a statement.

That environmental impact Banks spoke of is one of negative consequence. The ACCF points to research that they say shows the production of ethanol doubles greenhouse emissions when compared to gasoline over 30 years, making it a dirtier fuel in the end — a highly disputed claim.

“It’s just misinformation,” said Ohio grain farmer Chad Kemp about the anti-RFS ads. “The things they’re saying there is no scientific backing for. They’re trying to get the people to jump on board with it and basically, their idea is to kill renewable fuels in this country.”

The heated debate over the RFS really ramped up in recent weeks with dueling ad campaigns in Ohio and Washington, D.C. highlighting very different sets of facts pertaining to ethanol’s impact on the environment, the economy and so forth. So whose facts are right?

In the end, the complexities of these various issues generally boil down to some basic truths. The key for me is getting down to those basic truths and sorting out how I feel about those. So, here are some facts about the RFS (that are really facts) that helped me to form my opinion.

While there are many more nuances to the RFS debate, for me this set of undisputable facts is reason enough to support it. The government made a deal. Regardless of whether you like the deal or not, it was made and I believe it should be upheld and seen through to fruition. Maybe this set of facts doesn’t address your primary concerns about he RFS. Here are more real facts.

I would rather support farmers in the U.S. with my energy dollar than who knows who I am supporting when I use petroleum.

In the end, there is usually at least some kernel of truth in either side of these debates. Which facts matter to you? The way I sort through them is by identifying the key (and real) facts of the matter that really matter to me.

Either way, the RFS is a no-brainer in my book.