First there was body-shaming, next came pet-shaming. The propagation of untruths on social media in the form of memes has become a national pastime.  It was all harmless fun until our nation’s farmers became the next target of a group of mean-spirited internet trolls.  But corn farmers are fighting back in an unprecedented fashion.

In order to raise awareness of the new phenomenon known as farmer-shaming, America’s corn farmers are dying their hair green. “This is not a fashion statement,” said National Corn Growers Association President Wesley Spurlock. “It’s being done to bring a stop to the wide-spread mockery and misperceptions of farmers by those who don’t make their living in agriculture.”  Scratching his lime green beard, he added thoughtfully, “We may not have the cache of the average food blogger, but in our profession, we have to pay attention to science or we can’t get anything to grow!”

“So maybe corn isn’t touted by talk show hosts as the greatest thing since probiotics,” commented NCGA Chairman Chip Bowling, “but it can still be fermented and turned into a Bourbon Fizz containing all the same sugar calories and effervescence of kombucha.  Green hair is a small price to pay if I can get just one person to ask me about what I do and what I grow.  Let’s have a real conversation!”

It took CEO Chris Novak a while to convince the entire Board of Directors to agree to the drastic measure but after sharing with them examples of dozens of hurtful, farmer-shaming memes popping up around the internet, one grower concluded, “I know that pickup-driving farmers may not appear to possess the same political correctness as a hybrid on Hollywood Boulevard but doggonne it! We do our part, too! The equipment we use on the farm can deliver nutrients to crops with a pinpoint accuracy that would make even Tom Brady green with envy.”

Farmers understand that because they only represent less than 2 percent of the population and operate in mostly rural areas, most Americans don’t really know what they do or why and how they do it. So if you want to get to know your food, get to know a farmer. If there’s not one near you, we’ve got you covered. 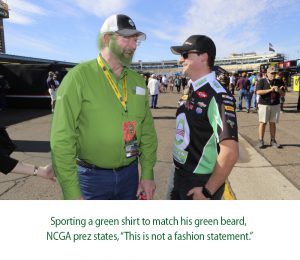 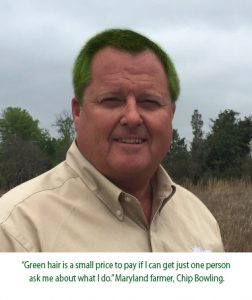