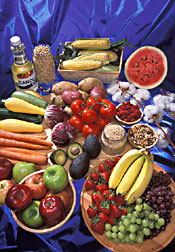 This photo from the image library of the U.S. Department of Agriculture shows crops or products that have either already been genetically engineered or are involved in ongoing or planned transgenic studies.

Biotechnology and genetic engineering are often a source of controversy because of fears that modifying crops genetically could impact human health or biodiversity or something. But a recent study indicates that genetically modified crops might actually help contribute to increased productivity in sustainable agriculture.

The study published in the June 8 issue of the journal Science, analyzes for the first time environmental impact data from field experiments all over the world, involving corn and cotton plants with a Bt gene inserted for its insecticidal properties.

In an analysis of 42 field experiments, scientists found that this particular modification, which causes the plant to produce an insecticide internally, can have an environmental benefit because large-scale insecticide spraying can be avoided. Organisms such as ladybird beetles, earthworms, and bees in locales with “Bt crops” fared better in field trials than those within locales treated with chemical insecticides.

What is kind of ironic about the whole genetic engineering/biotech controversy is that the same people who have problems with genetically modified crops often have no problem with the concept of manufacturing embryos to use their stem cells for research to find “cures” for diseases or conditions - which is essentially genetic engineering on a human level. California is a good example of that kind of thinking, where they want to ban farmers from planting GM strawberries, while at the same time provide taxpayer dollars for embryonic stem cell research.