Give Me Corn Ethanol or Give Me…? 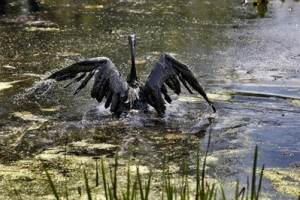 Dear New York Times…Your editorial today regarding corn-based ethanol is superficial, either uninformed or malicious, and a disservice to the citizens of this nation looking for real energy solutions we can implement today.

Before addressing some of the onerous points in your piece, please take a look at the attached photo. This is not from the BP spill in the Gulf but rather the latest incident in Michigan which has dumped a million gallons of oil into a river and is now 80 miles from polluting Lake Michigan. Oil is and always has been a loaded gun from an environmental perspective.  From leaking tanks at service stations to oil tankers grounded on coral reefs in storms. No more explanation needed on this one.

However, perhaps the biggest point you fail to address is wind, coal, and geothermal don’t make your car go. Natural gas can be used as an automotive fuel but it too is not renewable and has other issues I won’t go into here today. Solar….I’ll race you with my bicycle.

Will ethanol be made from other sources some day?  Undoubtedly. Other biomass sources show real potential and will come with the proper research and development, but corn-based technology and infrastructure is the very launching platform for this effort. Yet opponents would have us build our domestic energy house without a foundation.

Ethanol…dubious environmental benefit? Line up the hundreds of studies regarding ethanol, look at the funding sources and consider what is left. What you will find is a long trail of reputable scientists and institutions public, private and governmental that clearly shows the environmental benefits of ethanol.

When compared to petroleum especially, ethanol is a rock star in regard to cleaning the air, maintaining water quality, and soil management. On the oil side think tar sands.

Your reference to the land use issue is also comical. Incredible productivity on our existing corn acres is easily supplying the growing ethanol industry while also meeting the needs of other markets. And yield growth is accelerating.

And finally, I think we must aggressively pursue all forms of renewable, domestic energy given the finite nature of petroleum and do so in good conscience because of the legacy we stand to leave future generations. To suggest we put our entire energy investment in “maybe someday” sources while ignoring a viable and tested source like ethanol is shortsighted at best.