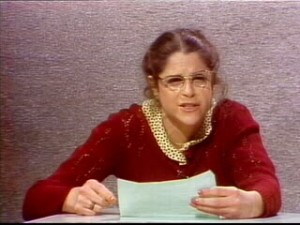 I just finished reading comments from The World Bank that say “…the effect of biofuels on food prices has not been as large as originally thought, but that the use of commodities by financial investors (the so-called “financialization of commodities”) may have been partly responsible for the 2007/08 spike.”

The whole time I was reading it I kept hearing the Ghostly voice of Gilda Radner, of Saturday Night Live fame saying “Nevermind.”

Her character Emily Litella was an elderly woman with a hearing problem who made regular appearances on SNL’s Weekend Update op-ed segment in the late 1970s. Attired in a frumpy dress and sweater, Litella was introduced with professional dignity by the news anchors, who could sometimes be seen cringing slightly in anticipation of the verbal faux pas they knew would follow.

After ranting in an outraged manner, the news anchor would point out she didn’t get the point to which Gilda would reply “Nevermind.”

The World Bank’s leaked” report in 2008 erroneously blamed biofuels for 75 percent of the commodity price spike. The authors of their most recent report conclude that it is unlikely biofuels played a significant role because they do not represent a large percentage of worldwide grain and oilseed use.

It really might have been nice to know this before the World cost the nation’s family farmers dearly in terms of public trust. More importantly, they left the public thinking we should reserve our corn for human food consumption alone. Given this market is mature and our corn yields are soaring, we must look to other markets to keep farmers profitable and viable. And the markets with the most growth potential are things like ethanol, biodegradable products and other industrial uses.

“In reversing course, this World Bank report reaffirms the marginal role biofuels play in world commodity and food prices,” said RFA President Bob Dinneen. “The RFA has long noted that ethanol production has continued to increase while corn prices have now returned to normal levels. Volatile oil prices, speculation, and adverse weather conditions all played far more significant roles in driving commodity prices to record and near record prices. This report should silence critics in the food processing industry, the livestock industry, on Capitol Hill, and anywhere else that sought to portray ethanol as the boogeyman. With this phony food and fuel discussion put behind us, perhaps a real conversation about America’s energy future can ensue.”

Well put Bob but I think the cow left the barn in regard to the damage the World Bank did with their previous faux pas. I wish Emily/Gilda was still around to tell American consumers “Nevermind.”