E85 Comes Out on Top in High Tech Competition 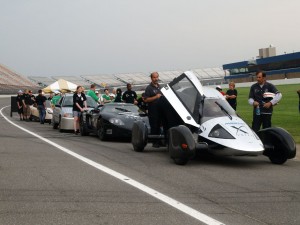 Automotive designers and race car mechanics and engineers from around the world ended their quest to create a 100 + mile-per-gallon vehicle today with an interesting development; the winner was powered by ethanol, E85 to be exact.  While many of the competitors chose to pursue the electric-battery option it was corn squeezings that ruled the day.

However, it is worth noting that the extensive coverage of the $10 million X Prize competition often referred to it as an internal combustion gasoline vehicle. Kudos to the New York Times for getting it right, although I would have liked to have seen E85’s prominent role higher in the story.

Teams from Virginia, North Carolina and Winterthur, Switzerland, with roots in the world of auto racing  won the first Progressive Insurance Automotive X-Prize but it was Edison2′s “Very Light Car No. 98” that took the top prize of $5 million.

The media dismissal of the ethanol connection begs the question “when did ethanol become the Rodney Dangerfield of fuel?”  We don’t get no respect.” From the Toledo Blade to Wired Magazine online to even autobloggreen , they missed the American fuel angle, the green angle, the tested and proven angle of ethanol made right here,  right now.  With a host of flexible fuel cars capable of using higher ethanol blends like E85 this deserved to be a key component of the announcement.

Having alternatives to imported petroleum is a great idea because consumer choice (such as the BYO blendyourown initiative) and competition in the marketplace is always a good thing.

On a positive note E85 did win the competition and it offers another example that we don’t lack for solutions to our problems but rather the vision and drive to make them reality.