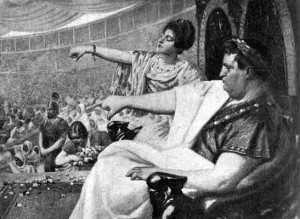 A friend of mine told me he thought he heard a strange sound coming from Washington, DC today. He wasn’t quite sure what it was. Sounded
vaguely like a cat being stepped on but he was suspicious it was the sound of Congress playing the fiddle while the capitol or at least reason burned.

For non-history buffs this is a reference to the Roman emperor Nero who is infamously known for playing the fiddle while Rome burned to the ground. Seems like a rather fitting historical reference after Congress has spent a solid week debating legislation that would hamper alternative fuel expansion while giving petroleum a pass.

However, he might have been mistaken. The mournful sound might have been the sound of the recession train coming around the bend again
with OPEC steering the engine. The cartel of oil-producing countries will have $1 trillion in revenues for the first time this year, benefiting from high prices that may cause a “double-dip recession,” according to the London Telegraph.

Oh my gosh….did they really just say “for the first time this year?” I guess that means we have been held up at the gas pumps for this mountain of cash before? Yes, we have, and it is time for the public’s short memory to stop.

Forecasts from the US government show that the Organization of Petroleum Exporting Countries, whose key members include Saudi Arabia and Iran, will collect a third more in revenues because prices have averaged $111 per barrel this year.

If you wondering what kind of catalyst it takes to cause another major recession before the last one is even purged from the memories of the still unemployed….this is pretty much it. We are rapidly running out of time to address our oil addiction in this country when our biggest export product is the U.S. greenback.

It is time to stop shooting ourselves in the foot when it comes to energy and our economy. Want to turn the economy around, let’s start by addressing our energy enslavement. Downsize your ride, drive less, support any and all domestic energy alternatives like ethanol that work. And by all means, would somebody stop stepping on the cat!