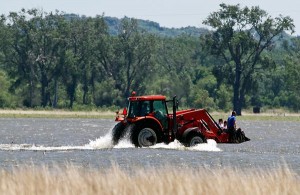 In a summer plagued by extreme weather, farmers along the Missouri and Mississippi Rivers watched as water swelled from its banks and, eventually, covered many of their fields.  These farmers continue working to salvage the 400,000 acres lost to the flood. This is about more than flooded farms and homes though– this is about people’s lives and livelihoods.

2011 has been a devastating year for farmers along the rivers.  In May, the U.S. Army Corps of Engineers blew up three levees in southeast Missouri, flooding 200 square miles of homes, fields and businesses along the banks of the Mississippi River. Shortly thereafter, they released historic amounts of water from the Missouri River Reservoir System, flooding an estimated 400,000 acres of prime farmland for four months. Stress, frustration and a sense of hopeless rolled in with the water.

The Missouri Corn Growers Association and Missouri Corn Merchandising Council are working along these growers that the government does not turn its back on the farms that they chose to flood.  Through a new documentary, Underwater and Overlooked: Crisis on the Missouri River, the groups bring the facts  to the forefront, holding the Corps accountable for the 2011 flood along the Missouri River banks and pushing them to take steps to ensure this never happens again.

The Army Corps of Engineers made the decisions that changed the lives of Missouri farmers. Now is the time to hear their stories, understand this tragedy and join with those supporting the victims as they rebuild.  Click here to see what actually happened in Missouri’s farmlands as they sat flooded for 16 weeks.  When the water goes down, the cameras go away and the spotlight dims, keep this story in the public eye until the levees are repaired and flood management is recognized as the top priority by the Corps.