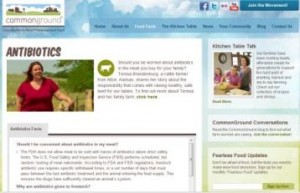 Today, the Associated Press demonstrated why common sense is no longer common and often does not make a significant amount of so-called sense.  In a story written to promote a Eurocentric anti-modern meat agenda, the media source rambles on about the evils of administering antibiotics to sick cattle, pigs and chickens. Fear-mongering at its finest, the author uses sparse quotes from agenda-driven groups, unaccredited consumers and specialty producers who would personally benefit from a ban, to supplement the single, credible quote from the U.S. Food and Drug Administration which states clearly, when taken on its own, that indiscriminant antibiotic use is not favorable.

The questions ignored are myriad.  Do antibiotics have a role to play in animal agriculture? How are they actually used on a normal American farm? Why do the current regulations remain in place?

The author, through crafty copy, attempts to sway the reader from asking these basic, simple questions through a subtext appealing to the idea that all readers with common sense would make the same assumptions he does.  If using antibiotics can be bad, it cannot ever be beneficial.  If the interest groups and niche marketers seem like good, conscientious people, then the family farmers who day in and out produce safe, nutritious, affordable food choices in abundance for the country must be the party at fault.  The more modern technology, here in the form of medication, used to produce that food, the higher the chance that it will not be as wholesome as what our forefathers and mothers ate.

Useless nostalgia for a past seen through rose-tinted glasses aside, Americans today benefit from the safest food supply in recorded history.  They have a much wider array of healthy, safe choices than could have been conceived in a pre-penicillin past.

How can the average person find information, both facts and firsthand accounts, from knowledgeable sources willing to explain what they say?  In the case of food questions, CommonGround volunteers across the country share true accounts of how they grow and raise food on their own farms.  Plus, their stories are supported by credible, complete information from actual experts.

If you want to know more about antibiotics than the mainstream media is able to provide, take a moment to meet Teresa Brandenberg, a cattle rancher from Kansas.  A young mother who cares deeply for both her family and her cattle, Teresa understands the government regulations for antibiotic use, the reasoning behind those rules and how it affects families, both hers and yours.

Maybe, it could more accurately be said that common sense still plays an important role in the life of most Americans.  With so many urban and suburbanites far removed from the farm, asking questions about what feeds their families both natural and responsible. Talking to the people who live that story makes a lot of sense.

Listening to over-hyped, sensationalized accounts of farming written by Washington media? Maybe that is what doesn’t make sense after all.