To Improve as an Agvocate, Ask If You Serve Conversational Honey or Vinegar 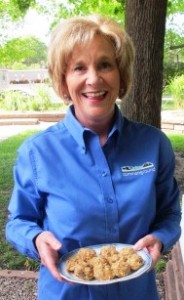 “You can catch more flies with honey than with vinegar.”

Watching CommonGround Colorado volunteers Danell Kalcevic and Cindy Frasier during a live television interview broadcast on Denver’s News9 last week, I remembered this metaphor, which the nuns who ran the high school I attended often used during my tenure.

These two women, facing the cameras for the first time, met remarks which may have ruffled other’s feathers with calm, patient, open understanding.  In return, they gained the trust and respect of the station staff and, most probably, many viewers as well.

Adding a bit of sweetness to their already pleasant personalities, they brought cookies.  Meat cookies to be exact.  So, immediately, they drew interest that, when coupled with the way in which they told their story, helped start a real conversation about food rather than a battle.

The lesson applies to everyone who dedicates time and effort to helping further the public discourse on farming.  Had Danell or Cindy become combative or defensive, the conversation would have stopped.  If we allow ourselves to put up that wall, it shuts out the people who most need to hear the real story of today’s family farmer.

Agvocates need to cultivate their interactions with the same care given to their land.  Imagine how it feels to have someone bluntly call a statement wrong.  Now, imagine a smiling face offering their perspective from what they have seen.  Which agvocate would more likely build a real, productive conversation?

Take a moment to evaluate how implication, tone and non-verbal cues affect a conversation.  Bring honey with you to agvocacy instead of vinegar.

Notably, it never hurts to bring a plate of Beef Cookie Recipe too.