The American Farm Bureau Federation recently got answers from President Barack Obama and Republican nominee Mitt Romney in a questionnaire asking the candidates about their positions on energy, farm policy, fiscal policy, labor and more. 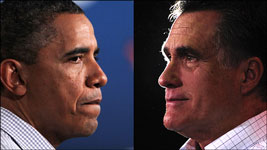 On energy, both candidates say they support maintaining the Renewable Fuel Standard.

“Our rural communities, farmers, and ranchers can increase our energy independence and boost the transition to a clean energy economy,” Obama said in his response. “We are increasing the level of ethanol that can be blended into gasoline, and the new Renewable Fuel Standard helped boost biodiesel production to nearly 1 billion gallons in 2011, supporting 39,000 jobs.”

Governor Romney said in his answer that developing our nation’s energy resources is key to the success of the agriculture industry. “The increased production of biofuels plays an important part in my plan to achieve energy independence,” said Romney. “In order to support increased market penetration and competition among energy sources, I am in favor of maintaining the Renewable Fuel Standard. I also support eliminating regulatory barriers to a diversification of the electrical grid, fuel system, and vehicle fleet.”

On farm policy, Obama said he understands the need for a strong farm safety net. “That’s why I increased the availability of crop insurance and emergency disaster assistance to help over 590,000 farmers and ranchers keep their farms in business after natural disasters and crop loss,” he said. “And I know that any farm bill passed this year – and there needs to be a farm bill passed this year – needs to have adequate protections for America’s farmers.”

Romney said he supports passage of a strong farm bill “that provides the appropriate risk management tools that will work for farmers and ranchers throughout the country.” He also noted that since other nations subsidize their farmers, “we must be careful not to unilaterally change our policies in a way that would disadvantage agriculture here in our country.”

Labor and estate tax are two areas where the two presidential candidates hold differing views in issues important to agriculture, according to Linda Johnson, AFBF Director of Policy Research. President Obama says a system to hire foreign workers should “only be used when U.S. workers are not available” while Governor Romney believes the “current system for issuing visas to temporary, seasonal workers is broken.”

While both candidates agree the estate tax system needs reform, Linda says there was clear distinction between the two on how that should be done. “Romney said he would eliminate the estate tax as president,” she said. “Obama wants to return the top tax rate on estates to 45% but said he would reinstate the $7 million per couple tax exemption.”

Listen to or download my interview with Linda about the questionnaire here: Linda Johnson, AFBF

Read all the AFBF questions and candidate responses.