The ethanol industry reached out to auto mechanics and technicians from around the country last week at events held as part of Automotive Service and Repair Week (ASRW) in New Orleans. 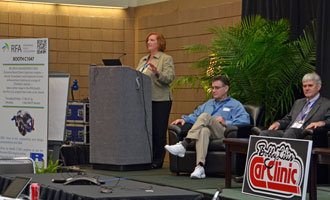 The Renewable Fuels Association, Bobby Likis Car Clinic Network and Ricardo Engineering teamed up to bring that message on the trade show floor of the Congress of Automotive Repair and Service (CARS) and during a Myth Busters panel at the National Automotive Service Task Force meeting.

Vint busted the myth that ethanol ruins engine performance by detailing the benefits of the fuel’s higher octane rating, which is a measure of its anti-knock properties. “The higher octane, the higher the cylinder pressure you can operate without causing destructive damage to the engine,” he said. “So high octane is good for extracting the maximum performance of the engine and improving the efficiency.” He explained how designing engines like the Ricardo EBDI (Extreme Boost Direct Injection) engine will better utilize ethanol’s higher octane rating.

Likis busted the myth that ethanol poses repair and service problems. “In the 41 years I’ve been in the automotive service business, I’ve never had a single engine fail as a result of ethanol,” he said, noting that engines have been designed to run on E10 for the past 30 years.

Finally, Davis busted the myth that consumers don’t want choice at the pump. “A recent survey complete by American Viewpoint showed 61 percent were in favor of replacing imported fossil fuel dependency with renewable fuels like ethanol,” Davis said, pointing out that the approval of E15 allows more options for model year 2001 and newer vehicles.

Bobby Likis also provided live broadcasts from the trade show floor with representatives from RFA and Ricardo to highlight ethanol. Likis offered a live feed of the event on Watch Bobby Live where he interviewed guests Thursday and Friday last week leading up to his regularly scheduled live program on Saturday from 10 am to noon Eastern. The program on October 13 featured RFA’s Kelly Davis as well as engineers from Ricardo.

I put together a little five minute highlight video of the show below and you can find more on the Watch Bobby Live page. You can also see pictures from the event here:
CARS Event Photo Album