Biotech May Be Solution to Food Allergies 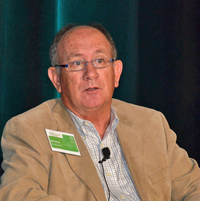 “Biotechnology is going to be the solution to food allergies,” said Iowa corn grower Bill Horan, who is COO of Horan BioProduction and also chairman of Truth About Trade and Technology. “As those products come along people are going to understand the real value of biotech.”

Bill farms over 4,000 acres of corn in northwest Iowa with his brother Joe and was on a panel at the recent Bayer CropScience Ag Issues Forum on farmers who are doing things differently. His difference is farming pharmaceuticals. “About 11 years ago we started with a French company,” he said. “They had inserted canine lipase into a corn plant to produce a lipase for cystic fibrosis patients.”

This year they will be working with a German company growing potatoes that produce an antibacterial protein for use in cosmetics. Horan points out some of the leading biotech companies are based in Europe, but because of the laws against growing genetically modified crops they have to contract for commercial production outside of Europe. However, he adds that it’s not easy for the average farmer to do it in this country either. “It’s very difficult to get permits from USDA to grow these biologics,” he said, noting that because he and his brother have been working at it now for over a decade they know how to get it done.