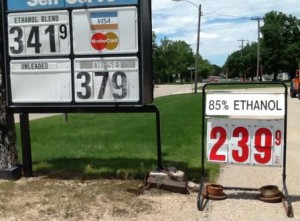 What happens when you give people a choice in what they purchase? The market goes to work.

Recently, the Iowa Renewable Fuels Association released data indicating that E85 sales jumped an impressive 43 percent in the second quarter of the fiscal year. With reports of a strong corn crop driving prices down, consumers with flex fuel vehicles are choosing to use their vehicles biofuel-ready capability to save big at the pump.

At the same time, Senators Klobuchar and Grassley are calling for an investigation of the practices Big Oil uses to squash choice and firm their stranglehold on America’s fuel economy. They want to make sure that the oil industry does not use nefarious tactics in its quest to quash consumer choice. They want all Americans to be able to benefit from domestically-produced biofuels the way Iowans already do today.

In the marketplace for fuels, consumers can only save when given choices. Overreliance on petroleum leaves consumers helpless when prices fluctuate. Fuel options, and the vehicles that allow them to take advantage of them, free Americans from the whims of a monopoly fully willing to put aside the best interests of the nation for the profitability of the few.

Show your support for Klobuchar and Grassley’s willingness to stand up to Big Oil and act in a bipartisan to defend America’s fuel freedom. Send a tweet applauding their actions at @amyklobuchar and @chuckgrassley today.