How One Cattleman Views Corn 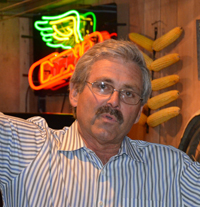 We’ve highlighted Bill Couser of Couser Cattle Company several times on this blog but this week was the first time I had the opportunity to meet and spend some quality time with this great guy and his fabulous wife and son during the Truth About Trade and Technology Global Farmer Roundtable.

The Couser operation has been a stop for the TATT Roundtable pretty much since it started in 2006 and while you would think the visit would focus on cattle, it’s really more about corn and getting more out of every kernel. “It’s no different than a barrel of crude. We don’t just get gasoline from a barrel of crude. We take it apart and get many different things,” he said. “When we look at corn, we can feed it, we can take it to ethanol plants, we can sell it domestically, we can sell it abroad.”

As one of the founders of Lincolnway Ethanol plant in Nevada, Bill is really excited about the cellulosic project with DuPont using corn residue. “We’ve got the residue there and if we manage it correctly, we have a new cash crop,” he said. Interview with Bill Couser

Bill put together a little powerpoint presentation that shows the multiplier effect of a single acre of corn going to an ethanol plant. When he figured that final amount corn was $7 a bushel and it added up to over $12,000 per acre. But even at $3, it’s still nearly $8,000. Watch the video to see how he determines that.