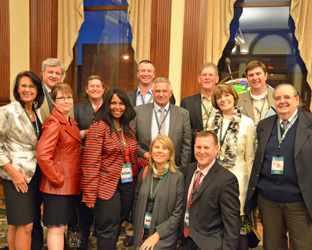 Since 2006, Truth About Trade and Technology (TATT) has been bringing farmers from different countries together during World Food Prize week in Des Moines to attend the event and share their knowledge and experiences with each other at the Global Farmer Roundtable. This year there were 16 farmers from 14 countries at the Roundtable, including Wisconsin farmer Jim Zimmerman who is chairman of the National Corn Growers Association Trade Policy and Biotechnology Action Team. Jim is pictured here (back row, second from right) with some of his fellow roundtablers.

Jim told us it was really interesting to spend the week with his fellow farmers around the globe. “There’s a lot of differences, but there’s also a lot of similarities,” Jim said, noting that he was very honored to be nominated and chosen to take part in the event. “Any time that you can participate in an international event like this, it’s a very good learning process.” Interview with Jim Zimmerman 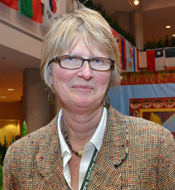 NCGA Chairwoman Pam Johnson of Iowa had a seat at the global roundtable in 2010 and she was happy to reconnect with some of her fellow alumni during this year’s World Food Prize symposium. “There were 20 of us from all over the world,” she said. “We’re all still working and engaged in agriculture in some way to be a leader and to explain why it is biotechnology is so important as a tool for food security.”

Pam was very pleased to see the focus on agricultural biotechnology at World Food Prize this year with the winners all being scientists who have pioneered its development. “Biotechnology is size neutral, it’s good for everyone,” she said, adding that World Food Prize is a great place “for the personal stories and the truth to get out.” Interview with Pam Johnson